While the world knew about the disaster at Three mile Island, few Americans are aware of what was actually the worst nuclear spill in U.S. history, according to officials at the Nuclear Regulatory Commission. At 5:00 AM on Jul 16, 1979, 100 million gallons of radioactive waster containing uranium tailings breached from a tailing pond into the north arm of Rio Puerco, near the small town of Church Rock, New Mexico.
One hours later, workers shored up the hole in the tailing pond dam, but by 8:00 AM the radiation was detectable in Gallup, New Mexico. Radiation was detected up to 50 miles from the site of the spill. Livestock and people were kept away from the river and children found playing in the water received full body scans at the Los Alamos nuclear labs in Albuquerque.

Altogether some 1,100 tons of uranium mine tailings (waste) breached from holding ponds, contaminating 250 acres of land and up to 50 miles of he Rio Puerco. On the first day of the accident, state Environmental Improvement Division spokesman Michael Triviso said that samples of he river water indicated radioactivity 6,600 times the maximum standards for drinking water. The Rio Puerco flows into the Little Colorado River which flows into Lake Mead. Lake mead, in turn supplies the water for Los Angeles and Southern California.

The Kerr-McGee Company and the United Nuclear Corporation operate the uranium mill and waste storage site. 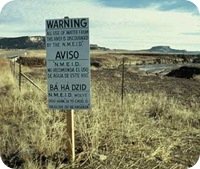 Six months after the Church Rock disaster, The Christian Science Monitor reported another major problem resulting from the spill. The Navajo Environmental Protection Committee charged that a percentage of he dam spill waster will percolate into the ground and when it hits the Mancos Shale it will be redirected northward into the aquifer system where it will remain for a few thousand years. Nonetheless, because of the economic importance of uranium to the area, the Monitor noted, â€œAccidents like the catastrophic Church Rock uranium tailing spill last summer are almost nonevents â€“ except for the people who live in the Four Corners.â€

The United Nuclear Corporation closed its mining operations down in 1984 and started a multi-million dollar cleanup effort. Kerr-McGee, the other company involved in the Church Rock tragedy, was the company cited in the celebrated Karen Silkwood case (Silkwood, and employee at the Kerr-McGee nuclear power plant in Oklahoma, suffered radiation contamination and died after her car was mysteriously forced off the road).